There is a great need for the services that LIFEDesigns and other similar providers offer.

The accepted definitions of disability have been changing during the past 40 years.  In the 1970s, the concept of a disability referred to an underlying physical or mental condition. Today, disability is seen as a complex interaction between a person and their environment. It includes emotional, physical, intellectual, and sensory impairments that create barriers to participation in everyday life.  It is the largest minority. Anyone can join this minority group. In places where the lifespan is over 70 years, people spend on average 8 years – 11.5% of their life span – living with disabilities (Disabled World).

Today, we know there are over 41 million people in the US with disabilities, representing 12.7% of the population (2019 American Community Survey).

Mental illnesses are serious medical conditions. They cannot be overcome through “will power” and are not related to a person’s “character” or intelligence.

An estimated 20% of US adults had any mental illness in 2019 (NAMI). The World Health Organization reported that Depression is the leading cause of disability in the world (2021). 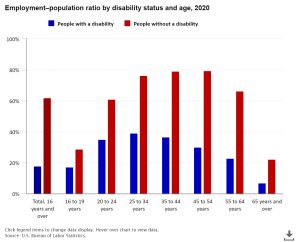 One of the most common reasons employers give for not hiring is fear of costly accommodations. However,

most (56%) of accommodations for employees with disabilities cost nothing to implement, while the rest have a median cost of $500.

Companies who hire report their employees with disabilities have better retention rates, reducing the high cost of turnover.  Other surveys show the retention rate after one year of employment for those workers is 85%.

In 2021 the average person receiving supplemental security income (a program for individuals with disabilities in need) paid 128% of their monthly income to rent a one bedroom unit (TAC). 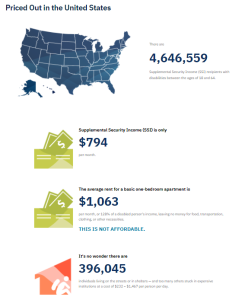 Since 1998, the housing affordability gap for people with disabilities has almost doubled as the cost of rental property has increased (Priced Out, 2010).

Unfortunately, in the state and across the nation, the funding does not match the need.

Learn how you can help LIFEDesigns continue to provide these much needed services to our clients with disabilities for years to come: go to our SUPPORT page to find out more.