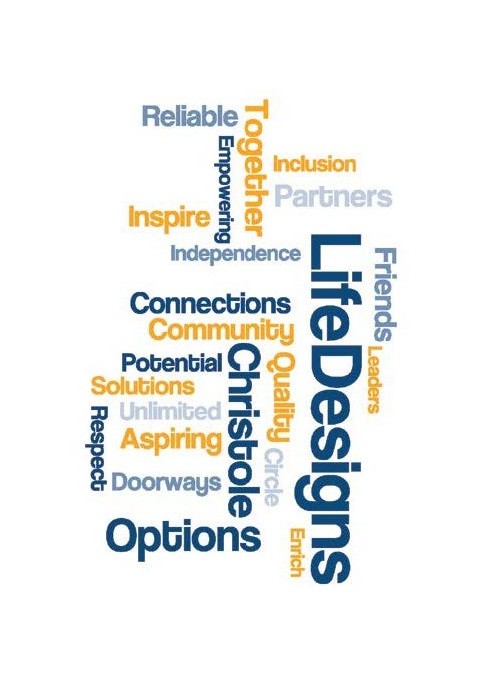 With the start of a new year in a few days time, a new social service agency will be born. The agency will be doing the work of two other agencies that have for many years sought to improve the lives of people with disabilities.

Those agencies, Christole and Options, will be no more, with the new LIFEDesigns assuming their functions.

Although there will be no layoffs with the merger, it still will save an estimated $200,000 annually and eliminate inevitable redundancies, particularly in administration.

The two organizations are complementary rather than competing, with Christole mostly operating group homes and apartments to house and care for clients with disabilities, while Options provides mostly in-home services to a similar group of client families. Not only will LIFEDesigns create savings, it will provide the opportunity for staff to move laterally or seek promotion within a larger worker pool.

The agencies fit well together and want this new agency to be seen as a merger of equals rather than as a takeover. Options, with a budget of $6.5 million, is somewhat larger than Christole, with its $4.1 million budget. Together, they’ll have the weight and buying power of a $10 million budget.

This is not the only merger on the horizon among social service agencies — with Bloomington’s several homeless shelters also working to come under a single umbrella.

In these times of great need and declining resources, it is wise to seek the efficiencies and reach that a larger operation provides. The concern, of course, is that the core mission of each agency is not lost. LIFEDesigns took a year and a half and a lot of work to create, work that’s necessary for success.

Two agencies that serve people with disabilities will become LifeDesigns.

Christole and Options, two organizations that provide services and support to people with disabilities in south-central Indiana, have agreed to merge into a single entity — LifeDesigns Inc. — effective Jan. 1.

“I’m excited,” said Susan Rinne, Options’ executive director. “We’ve been working on this for the past year and half, and it’s wonderful to see it finally coming together.”

Rinne said merging the two organizations will save them a total of about $200,000 a year through reduced administrative costs, audit fees and insurance costs.

“The biggest savings will be on the health insurance side,” she said. “By becoming a bigger group we will be able to get lower rates for our full-time employees. And by having just one audit instead of two, and by putting our two administrations together, we will save money there as well.”

Bert Clemons, president and CEO of Christole, said LifeDesigns will be run by a single, 23-member board composed of members of each organization’s current boards, and the new organization will handle all the fundraising and have a single endowment fund rather than two separate ones.

“The two organizations have the same mission,” he said. “We want people with disabilities to live as independently as you or I.”

LifeDesigns’ annual budget will be $10.6 million — combining Options’ budget of $6.5 million and Christole’s budget of $4.1 million.

Clemons and Rinne both said they do not expect the merger to result in any layoffs.

“We will be able to bring everybody on board,” Rinne said. “That’s possible, in part, because over the past year, each organization has not filled positions that have opened up in anticipation of the merger.”

Marianne Stemm, Christole’s human resources director, said, “Most of our staff are excited about the merger because it will provide them with more opportunities for lateral moves and promotions and advancing their careers.”

Rinne said the two organizations are now filing paperwork with state agencies informing them about the name change, and bringing the two agencies’ computer and human resources systems together.

“The reason for naming the new organization LifeDesigns is to emphasize that this is the merging of two equals into a new entity, not one group taking over another,” Rinne said.

Clemons said the merger will bring together two organizations with different strengths. He said 90 percent of Christole’s services are provided in group homes for people with developmental disabilities or autism and 10 percent are provided in clients’ homes or apartments. With Options, those percentages are reversed.

“There’s not much overlap,” he said. “It’s two agencies with complementary services that are coming together in one organization.”

Clemons said a decision has not yet been made concerning the future of Christole’s office in Nashville. Rinne said the new organization will serve more than 350 individuals in Monroe, Greene, Brown, Morgan, Lawrence, Owen, Bartholomew and Johnson counties.

Rinne said LifeDesigns hopes to have its new website — lifedesignsinc.org — up and running in January, and by next summer or early fall plans to complete its $1.1 million building project that will replace one of its aging group homes and add four affordable housing units to be rented to low-income members of the community.