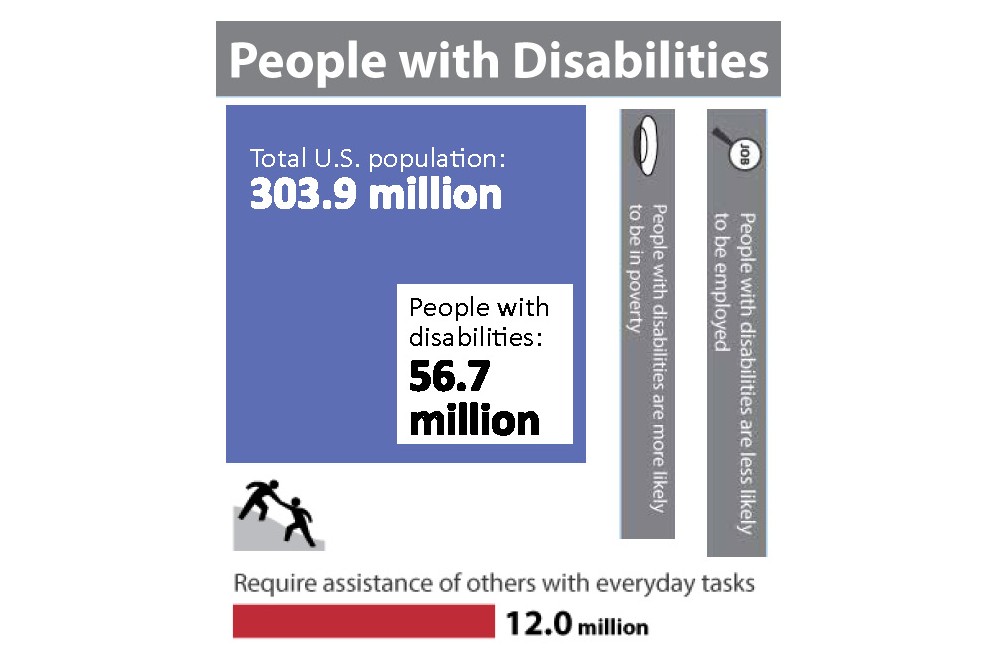 56.7 million – Number of people with a disability living in the United States in 2010. They represented 19 percent of the civilian noninstitutionalized population. Disabilities include, for instance, having difficulty seeing, hearing, having speech understood, walking, bathing, dressing, eating, preparing meals, going outside the home, or doing housework, having Alzheimer’s, dementia, autism, cerebral palsy, or dyslexia, and being frequently depressed or anxious.

19% – Percent of the civilian noninstitutionalized population in West Virginia with a disability ? the highest rate of any state in the nation. Utah, at 9 percent, had the lowest rate.

53% – Percentage of the civilian labor force with a disability who worked as either service workers (except protective services), with 18.2 percent, administrative support (15.1 percent), sales workers (10.4 percent) and management, business and finance (8.9 percent).

315,000 – The number of janitors and building cleaners with a disability ? the most common occupation for people with disabilities. Among occupations with 100,000 or more people, dishwashers had the highest disability rate, with 14.3 percent.

30% – Among people who received income-based government assistance, the percentage who had a disability; 18 percent of assistance recipients had difficulty walking or climbing stairs.

58% – Among people who received both cash and in-kind assistance, the percentage who had a disability.

42% – The percentage of income-based assistance recipients in West Virginia who had a disability, which led all states. Arizona ranked the lowest, at 25 percent. 11.6 million – Not shown above, but is the number of people 15 and older who do not use a wheelchair, but do use a cane, crutches or walker.

Here is the editor’s note from the Census Bureau: “The following data were collected from a variety of sources and may be subject to sampling variability and other sources of error. Facts for Features are customarily released about two months before an observance in order to accommodate magazine production timelines. Questions or comments should be directed to the Census Bureau’s Public Information Office: telephone: 301-763-3030; fax: 301-763-3762; or e-mail: <PIO@census.gov>.”